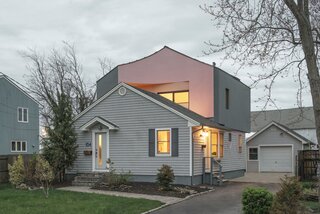 From the Architect: “New York studio Architensions has designed House on House, the transformation of a compact suburban home in Babylon, Long Island, that includes the addition of a second-floor volume that looks as if another house has been placed on top of the house. “We wanted to “hack” the typology of the American suburban single-family home,” says architect and cofounder of Architensions Alessandro Orsini.

“The stair connecting the first floor and the new addition needed to be compact, but also needed to be an element of separation. Architensions used a discrete cylinder, which helped to develop the design from inside out. On the exterior, the striking geometry of the cylinder appears subtracted from the square volume to create a street-facing, semi-circular outdoor patio, which extends from the second-floor bedroom. This acts as a subversion of the suburban typology, in which decks and patios are introverted towards the backyard, rather than extroverted towards the front.

“The ground floor has been reconfigured, opening the kitchen and living room and adding a study and a guest room. On the new second floor, a large open space is used as a primary bedroom, with the cylinder creating an interior partition between the sleeping area and the front patio. The primary bathroom is clad in speckled terrazzo and features a communal sink located in between the bathroom enclosure and the walk-in closet, rejecting the traditional single-family separation of bed and bath, and questioning traditional concepts of modesty and privacy. Yellow is used throughout the project to highlight transitions, bring light inside, and define spaces.”