Welcome to 2020, where once again, the Toyota Supra is back. We hailed its return last year when we slid behind the wheel of the first new Supra sold here in the 21st century, and Toyota has gone and changed things up just one year later. Now, there are two Supras: a new, less powerful four-cylinder Supra that’ll serve as a base model, and a more powerful version of the previous solo entry that showcases the type of incremental improvements Toyota says we should expect every model year. So, although owners of the 2020 Supra might be miffed by this news, there’s a good chance 2021 owners will feel the same way in 12 months.

For now, though, the 3.0-liter turbocharged inline-six produces 382 horsepower and 368 pound-feet of torque, increases of 47 and 3, respectively, from the 2020 version. We weren’t exactly begging for more power, but aren’t going to complain, either. This is the same engine spec that’s found in the M40i version of the Supra’s sister car, the BMW Z4, which shares a common block and crank as the “lesser” version found in the 2020 Supra. However, it features a totally new head and exhaust manifold design along with new pistons and a reduced compression ratio from 11:1 to 10.2:1 to better handle the boost. Peak horsepower is made at 5,800 rpm now (it was previously 5,000), and carried on to the same 6,500 rpm — redline is 7,000 rpm. The torque band also shifts slightly higher in the rev range, as all 368 pound-feet are available from 1,800-5,000 rpm — in 2020 that range was 1,600-4,500 rpm. Theoretically, this should make the car happier in its mid- and upper-rpm ranges.

With all the extra power, Toyota has fettled with the chassis and re-tuned all the systems to match. One physical change is the added aluminum bracing. These braces go from the strut tower mounts to the radiator support, and Toyota says they’re meant to stiffen up the car’s front end feel. The adaptive dampers were re-tuned along with the active differential, electric power steering and stability control. Without all of this, Toyota says the car would’ve felt more tail happy than it already is with the extra power. 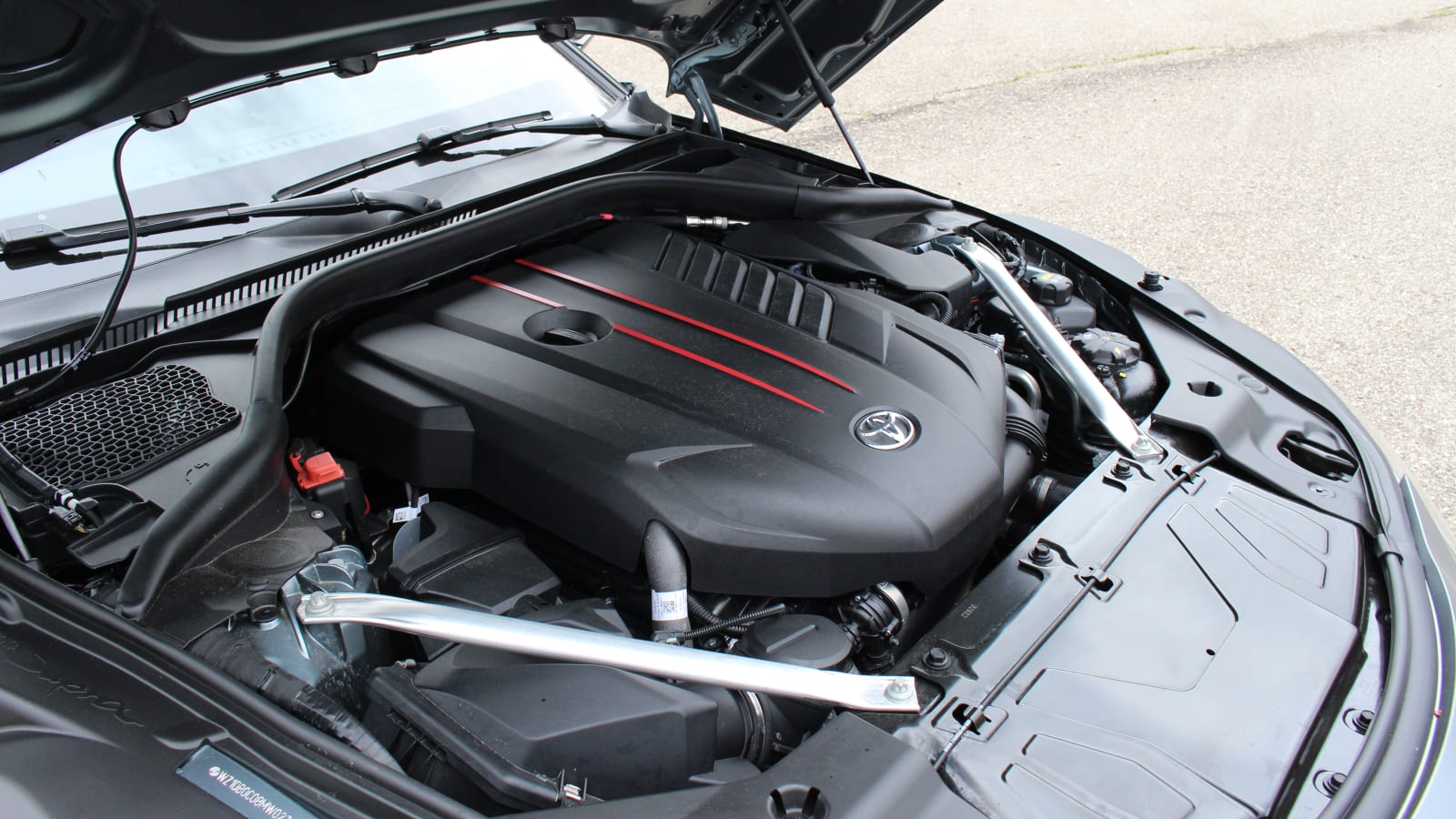 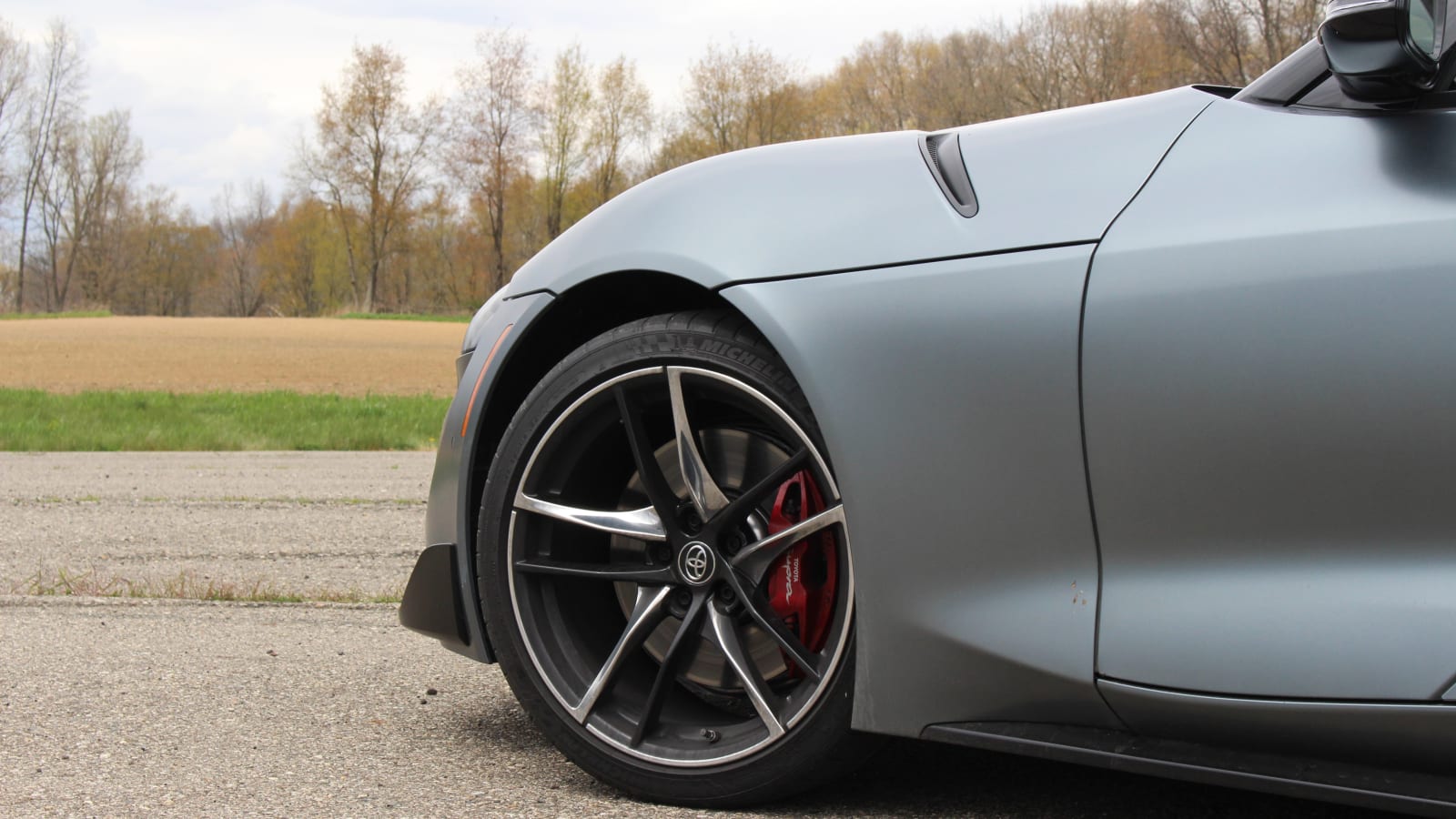 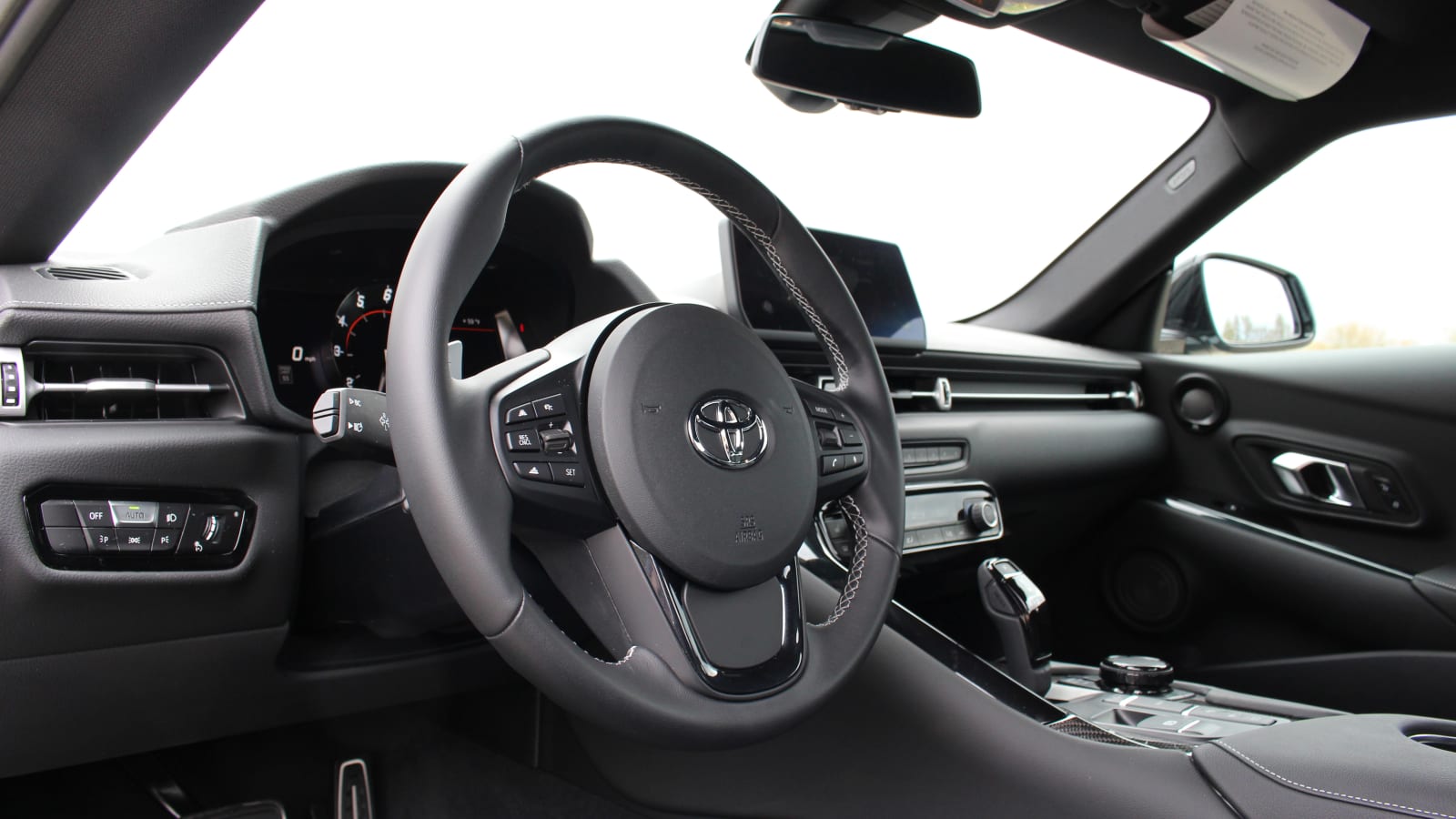 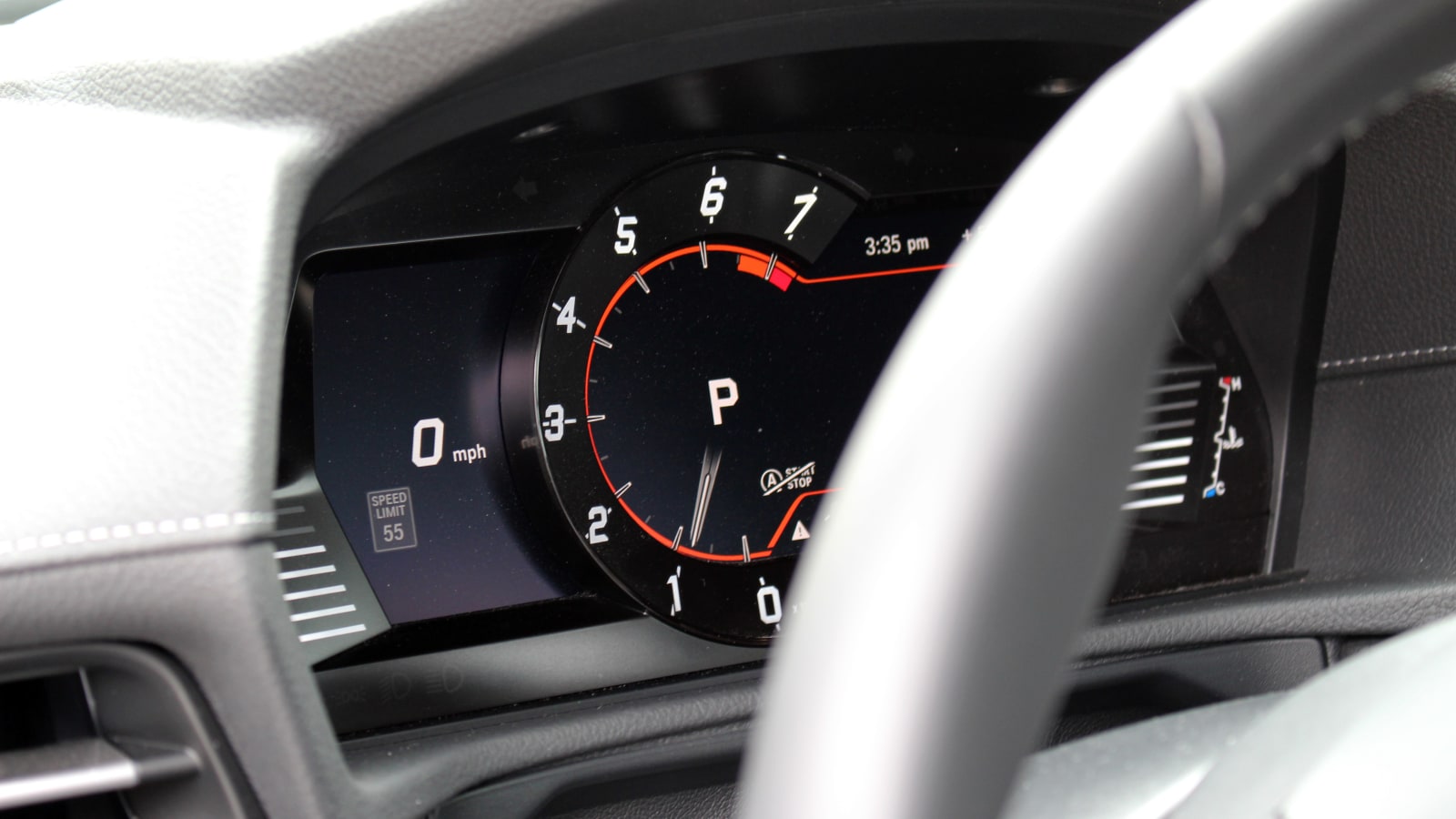 And then there’s the new four-cylinder Supra 2.0. Not surprisingly, it too packs a BMW-designed and built engine, a 2.0-liter turbocharged inline-four good for 255 hp (5,000-6,500 rpm) and 295 lb-ft of torque (1,550-4,400 rpm). You’ll find the same four-cylinder in the Z4 sDrive 30i, where it makes the exact same power figures. Before you ask, it isn’t available with a manual transmission, either, as a ZF eight-speed automatic once again does the shifting duties.

The drop in power is paired with a drop in weight and features, too. A Supra GR 2.0 weighs in at 3,181 pounds, which is about 200 pounds lighter than the inline-six car (3,400 pounds). Not all the weight loss is due to the smaller engine, though. Toyota swapped the heavier BMW-donated active differential for a traditional limited-slip differential, swapped to a fixed suspension instead of the adaptive one (springs and dampers are not shared with the 3.0), downsized the brakes, switched to manually-adjusted seats and downgraded the standard stereo from 10 speakers to four. Doing so wasn’t entirely about achieving a lower price point, as Toyota says removing weight throughout the car as opposed to just over the front end helped retain the Supra’s 50/50 weight distribution.

Unlike our original First Drive of the Supra, this one for the expanded 2021 Supra lineup regrettably couldn’t take place at a race track. Instead, we got to spend a week living with each Supra on our home turf in Michigan. Basically, we’ve traded helmets for face masks.

Starting with the inline-six: Toyota says the 0-60 mph time dropped from 4.1 seconds to 3.9 seconds for 2021. The 2020 GR Supra already felt like a sub-4-second car to 60 mph, so there’s little doubt the 2021 Supra dips even further into the threes. Yet, even if there seems to be a hair more pull in the upper rev ranges, the overall experience at road-legal speeds remains largely the same. The 2020 Supra was already one spicy meatball – the 2021 is akin to adding a red pepper flake or two on top. Sure, it’s a bit hotter, but you don’t need it.

It continues to break traction without even trying, delightfully squirming about on warm and colder roads alike. The relaxed “Sport Traction” mode is perfect for having a bit of tail happy fun, as it allows for an active rear end but prevents you from getting yourself into too much trouble. It’s just the right amount of leeway to be semi-irresponsible, and it’s more fun than BMW’s stricter nannies allow.

Similarly, Toyota’s revised chassis tuning for 2021 has largely retained the car’s character. It’s still comfortable enough in commuting duties, and if anything, it’s a hair more composed. Again, we weren’t blessed with a track this time around, but there seems to be less body movement in quick transitions, lending to a sharper-feeling car. The adaptive dampers do make a difference when dialed up to full stiffness in Sport mode, but the car hardly loses a beat in its softer Normal mode. In fact, keeping them in the softer setting can be beneficial on choppy pavement and undulating surfaces to maintain chassis composure.

As for the new entry-level 2.0, it’s more than just “the slower Supra.” Just like the 3.0 and indeed most BMW engines, the 2.0 feels a bit stronger than the 255 hp it’s rated for. And although it’s obviously slower than the 3.0, it’s still mighty quick, hitting 60 mph in 5.0 seconds according to Toyota’s stopwatch. That’s 0.2 second quicker than the Z4 with the same engine and only 0.1 second off the pace of a base Porsche 718 Cayman.

Taken alone, the acceleration is strong and plenty sufficient, but the engine is nevertheless missing the fizz that comes in the form of sound and personality. Like other turbo-fours, it’s an effective, powerful engine, but it fails to draw us in the way the inline-six does and the way a Supra should. Switching into Sport mode opens a valve in the exhaust, giving it a deeper tone and introducing light pops on the overrun. Toyota says it’s not adding in sound through the speakers on either the 2.0 or 3.0, so what you’re hearing is legit. Nevertheless, the inline-six is still a much more alluring beast to your ears.

Without the adaptive suspension, this Supra’s ride and handling balance is a compromise. Toyota has retained most of the 3.0’s handling prowess in this lighter package, and the Michelin Pilot Super Sport tires stick like glue. That agility and capability in corners comes at the expense of everyday comfort, though. Tetsuya Tada, chief engineer, remarked to us last year that a byproduct of using the adaptive dampers to improve handling was the Supra’s excellent ride quality. They allow the engineers to make fewer compromises in the car’s ride-handling balance, but they come at a higher cost than a fixed suspension would. Removing the adaptive dampers is just one way Toyota was able to make the 2.0 cheaper, and engineers chose the compromise of making the 2.0 ride similarly to the 3.0, while taking a tiny step back in sharpness comparatively.

Some may wish instead for a sharper edge, ride quality be damned, or perhaps for a plusher tune to pair with the Supra’s grand-touring capabilities. You just can’t make everyone happy, which speaks to the benefit of the adaptive dampers and the 3.0’s consequent ability to please on the track and the open road. Perhaps Toyota will offer them on the 2.0 in the future and is just holding out for another of its yearly updates. After all, BMW already offers both as options for the 2020 Z4 sDrive 30i.

No need to bury the lede here. The 2.0 doesn’t possess the same appeal as the 3.0. A sports car is an emotional purchase, and that sports car should make you feel alive when you’re driving it. The 2.0 goes through the paces, but it doesn’t make us giddy every time we drive it like the 3.0 does. Both engines are smooth and rev quickly, but revving out the I-6 is silky and fluid in a way that makes us want to keep going up and down over and over again. Those especially loud pops and bangs on the overrun only make things even more entertaining.

Losing out on features like powered seats is no detriment for the 2.0, though. The buckets are still highly adjustable, and the seats themselves are just as good as those found in the 3.0. Well, apart from missing the option of being heated. For the most part, though, both cars are on equal footing from an interior and luxury perspective. Toyota added the 8.8-inch screen as standard equipment for 2020, a nice improvement from the 6.5-inch screen, but it continues to run BMW’s last-generation iDrive interface.

And there’s going to be an A91 Edition available (depicted in the gallery above) that adds some carbon fiber appearance items, graphics, black-painted wheels and an exclusive Refraction Blue paint color. It’ll be limited to 1,000 units.

Of course, you’re going to pay more money for the I-6 than the I-4, but as Toyota has yet to release pricing, we don’t know the exact figures. Still, a 2020 Supra starts at $50,945, so expect a small bump upwards for the extra power. We’re expecting Toyota to come in with a low $40,000 price point for the 2.0, which would be a sizable gap, even if the spread is tighter than the $14,000-crevasse between Z4 variants.

This opens the Supra up to more buyers who’ll still get a superb sports car, especially since the selection of like-priced performance entries is few and far between. The Nissan 370Z is 12 years old, and although the Mustang GT and Camaro SS have reached incredible handling heights, they can’t match the light, two-seater Supra. They’re just completely different animals. Its Z4 30i platform-mate and a base Porsche 718 Cayman are perhaps the closest in nature, but they cost far more money. In fact, the Porsche is pricier than the Supra 3.0, starting above $57,000. The Cayman S, which is still slower than the Supra 3.0, starts at about $70,000. The Z4 M40i isn’t that pricey, but at $64,695, will remain far afield of the Supra despite the two now sharing an engine.

Basically, the value proposition deepens for 2021 as does the potential pool of buyers. That said, if you can stretch to the 3.0, we suggest taking that route. The inline-six feels at home in this car, like it was meant for it – and not just because of historical precedent. The 2.0 feels like a transplant; it’s acceptable and still plenty good to drive, but it’s no Supra miracle.

Seagate to Break Ground on Custom Home at Talis Park